Birt & Co. estate agent, Huw Bridges, has had a very busy time over the last couple of weeks.  Huw completed the Ironman Staffordshire 70.3 event on 12 June - a 1.2 mile swim, a 56 mile bike ride finishing with a 13.1 mile run!  Having completed the full Ironman Wales 2015 course, Huw said this was a great event and excellent training for his entry to Ironman Wales 2016, which is being held in Tenby on 18 September.

Not content with a quiet weekend to recover, the following week Huw turned his attention to fundraising for the Wales Air Ambulance, joining 23 members of the Tenby Aces Cycling Club on a sponsored cycle to raise funds after two of their members had to be airlifted to hospital following a road accident just before Christmas 2015.  The 200 mile cycle route left the Wales Air Ambulance Station in Caernarfon at 3.45 am, travelling through the Snowdonia National Park to the new Wales Air Ambulance Station in Llanelli, finally finishing in Tenby's Tudor Square at around 9.15 pm.  Other cyclists joined along the way at 100, 150 and 170 miles, to bring the number of cyclists finishing to over 50.  Well done to Huw, for completing the 200 miles, and also to all the other members of the Club who are hoping to raise almost £15,000 for the Wales Air Ambulance.  You can donate to this worthy event via www.justgiving.com/tenby-aces1 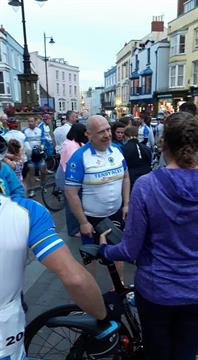 Once logged in you can amend your personal details, add/amend/delete email alerts and access your saved properties.

New property alerts are sent to your requested email address at your selected frequency once we publish a new property or a price change takes place.

To manage your alerts, click on the members icon at the top of the screen once you are logged in alternatively you can access this from each and every property.

You can register here!